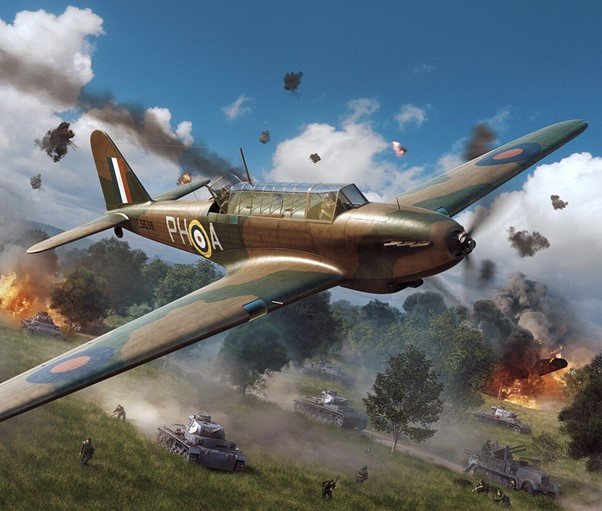 Paul Richey, a Royal Air Force (RAF) fighter pilot with No. 1 Squadron flying Hawker Hurricanes, said of the Fairey Battle crews during the Second World War that “we didn’t give them much for their chances.” Nor did many others when Nazi Germany invaded France and the Low Countries in May 1940. Yet onwards the Battles flew in low level tightly packed formations into the melee of machine gun and anti-aircraft fire. In three weeks, 100 Fairey Battles were lost along with 119 crew members. The Fairey Battle light bomber had once promised so much when it first flew in March 1936. It was powered by the same Rolls Royce Merlin engine that also powered in the modern and fast front line RAF fighters the Supermarine Spitfire and Hawker Hurricane and that would later power aircraft like the De Havilland Mosquito and Avro Lancaster. When the Battle entered RAF service in 1937 it could carry twice the bombload and cover twice the distance of the Hawker Hart bombers it replaced, yet three years later the heavy losses in the opening stages of the war resulted in the Battle being withdrawn from frontline service in October 1940. Technological advancements as well as a lack of planning and foresight from the Air Ministry had seen the Battle become a slow and sluggish shadow of a design that had once seemed so promising. Yet the full story is rarely examined, and the aircraft and its crews had left an indelible mark. It was a Battle that had claimed the first RAF ‘kill’ of a Luftwaffe aircraft, a Messerschmitt 109 fighter, an aircraft that far outclassed the Battle. The first RAF Victoria Crosses (the highest gallantry award to be bestowed to British service personnel) were awarded to two Battle crew members. It later found a new role as a training aircraft for Allied bomber crews that would fly aircraft such as the Lancaster which would play a vital part in the eventual Allied victory over Nazi Germany. This talk will examine the lesser-known stories of the Fairey Battle and examine why this aircraft left a legacy of a grim Fairey tale.